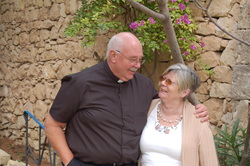 I was born at St. David's Hospital in Cardiff and lived my first four years in Grangetown, Cardiff, before my mother and father moved to the new Council Housing Estate of Llanrumney on the outskirts of Cardiff.  I attended Pen-y-bryn Infant and Junior School before moving to Llanrumney Secondary Modern until I was fifteen.  In 1967 I left school and took an Apprenticeship at the British Steel Corporation East Moors Cardiff as a Fitter/Turner, leaving there as a qualified Tradesman in 1973.  My ambition in school was to become a Draughtsman which for only a short time I achieved at South Wales Forgemasters, Taff's Well as a Design Draughtsman.  Unfortunately I became disenchanted with Draughting and resigned in 1974.  That year I became a Police Constable with the South Wales Constabulary where I experienced of all types of Police work.  I however spent the last 22 years of my 30 years of service on the Traffic Dept., the latter 15 years were spent dealing solely with fatal road collisions.  For my final 3 years I responsible for setting up a unit dedicated to investigating these collisions, from initial investigation to submission of the prosecution case along with oversight of the resulting court proceedings, I retired in 2004.

My spiritual upbringing was based in Anglicanism in The Church in Wales, having been baptised in St. Paul's, Grangetown by my Godmother, Auntie Joyce's (We have lots of aunties in Wales, who do not have to be related in any way so to be!) husband, the Reverend Richard Care, the then Curate of the Parish.  During my late childhood and teens I was attached to 'Bethany' Gospel Hall in Llanrumney, but spiritually moved away from any form of organised church during my young adulthood, although my faith in God remained quite firm.  I moved back to church with the involvement of Mary in my life where I returned to Anglican worship at Ss. Dyfrig and Samson back in Grangetown.

In 1987 I was eventually Confirmed with Auntie Joyce being my sponsor.  Over the next decade I experienced such a 'Call' to do something, something I knew not what, but knew had to be connected with Christ.  After many years of private deliberation, discernment and testing, I felt that God was calling me to be ordained.  Eventually in 1998 I started to do something about it and subsequently offered myself for ordination in the Church in Wales and was accepted.

In 1999 I started studying during evenings and weekends on the Llandaff Ordination Course, accredited through Bangor University and based in St. Michael's Theological Collage, Llandaff.  In 2003, my final year in the Police, I was ordained Deacon so was The Reverend P.C. Jeff Williams as I was the Non Stipendiary Assistant Curate at the informally grouped Parishes at, St. Mary the Virgin with St. Stephen the Martyr in Cardiff Docks (That infamous area of Cardiff named 'Tiger Bay'), Ss. Dyfrig and Samson and St. Paul the Apostle, Grangetown, Cardiff.  My retirement from the Police coincided with my Priesting in 2004.

My special area in ministry lies wholly in the field of an ordinary Parish Priest.  I have had some experience of Hospital Chaplaincy work and spent five years on the Mediterranean island of Malta where due to the large number of British Expatriates the pattern/demographics of ministry there are almost identical to any parish in the U.K., with a number of additions to ministry which you would expect in a holiday environment.

Whilst in Malta I served as the Chair of the Malta and Gozo Ecumenical Council and had a wonderful involvement with so many Christians there.

We have two children; Gareth and Victoria, who both have their families Gareth with Ruth, Ffion aged 9