THE HOLY FAMILY'S FLIGHT INTO EGYPT

Throughout history, for reasons of war, conflict, disaster and persecution, people have been forced to flee their homes, villages, towns and countries.

After the Second World War which affected thirty countries around the globe, many people were displaced.  In 1951 the United Nations Convention relating to the Status of Refugees was established, giving everyone the right to asylum.  Along with UNCHR numerous societies have been working for the plight of sanctuary for refugees and in the sixty-two years since the convention was established, these societies have been committed to supporting refugees.  The 1951 Convention became the key legal document in defining who is a refugee, their rights and the legal obligations of states.  The 1967 Protocol removed geographical and temporal restrictions from the Convention and in July 2001, the UNHCR published a special edition of its Refugees Magazine dedicated to the 50th Anniversary of the Convention.

It is a sad fact that throughout history, whilst governments and political agendas change, the need to provide for refugees does not!  No one can predict the wars, conflicts, oppressive regimes or natural disasters that will force people to seek asylum in another country.  Though we can all make sure that anyone who seeks sanctuary gets the support and care they deserve enabling them to rebuild their lives in safety.  Even in the 21st century there is still so much in the News about Refugees; Libya, Ethiopia, Eritrea, Haiti and of course Syria to name a few.

When Fr Jeff was serving in the Diocese of Gibraltar in Europe, before coming to the Good Shepherd, Chard in February 2013, he and his wife Mary lived in Malta, the biblical site of St. Paul's shipwreck whist he was en-route to Rome for his trial.  Soon after arriving, both Fr. Jeff and Mary were overwhelmed with the fact that there were so many people; men, women and children, who were losing their lives in the waters of the Mediterranean between Europe and North Africa, in an attempt to flee from so many countries.

They soon found out that there were approximately 500 souls in unsuitable and unstable boats in those waters at any one time!  The lucky ones did not drown but landed or were rescued, just like Paul and landed on one of the islands south of Italy.  The Mother's Union had started a project with the Mother and Baby Unit at the Hal Far Refugee Camp where Mary came into direct, close contact with mothers who had been rescued whilst still cradling their lifeless babies adrift in those cold seas. 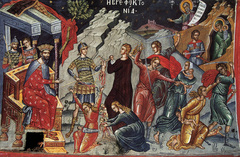 The Massacre of the Innocents.  When Herod the Great had that visit from the Wise Men who asked where to find the newborn "King of the Jews", Herod became paranoid that this child would threaten his throne.  So Herod initiates the Massacre of the Innocents in hope of killing the child.  But an angel appears to Joseph in a dream and warns him to take Jesus and his mother out of their own country and into Egypt.  Exile, for whatever reason is a terrible thing, for it means that one cannot live among one’s own people.  It entails alienation and the experience of being an outsider, an 'Other'.  It brings hardship, uncertainty, and fear.  Any one or all of these feelings are likely part of the Holy Family’s experience on fleeing Bethlehem shortly after Jesus is born and they heighten and further show the poverty of the God-Man who choose to humble himself to be born in a manger.

From what was the Holy Family fleeing then?  Certain death, the extinguishing of the hope of Israel, and the loss of future glory of their nation, but more than these, they were fleeing from the possibility that God’s plan for the salvation of the world might be thwarted.  At that moment in the history of the world, great forces were working against God’s plan, and while they were confounded for the time being, these forces left a stream of dead infants and wailing mothers in the Holy Family’s wake.

The calls for the death of the newly-born Christ would not stop until they had achieved their aim, and so it is that Jesus’ entire life is circumscribed by the promise of His death on Calvary.  And yet, Joseph and Mary were attentive to the word of God that came to them in a dream and so they were able to contribute to the thwarting of the plans of God’s enemies.  God made use of them in their lowliness, depending upon their obedient generosity for the care and protection of his only beloved Son.  The obstacles to Jesus’ fulfilment of his saving mission here on Earth are indeed great, but God’s providence provided for his protection at the moment in his life when he was most poor and vulnerable, depending upon Joseph and Mary for everything.

Mary and Joseph, in their turn, relied entirely upon God, not knowing where their journey into exile would lead, when they might be able to return to their native land, or how the promises that had been made to them would come to be fulfilled.  Without understanding fully, they trusted in God’s word and escaped the destruction that was chasing them in the land of Israel.

What can we do?  Well, we can question ourselves on how do we experience fear and uncertainty in our own life?  Do we put all our trust in God?  What keeps us from being free to drop everything and follow God’s will?  What can we do to align our lives more fully with the poor and the outcast, those who are exiles in our own lives and world?  When we celebrate the feast of the Holy Family we should think of the image of a mother trying desperately to deliver her child to a place of safety above the cold Mediterranean Sea and thus becoming a refugee in another land, equating it to Jesus, Mary and Joseph in that foreign land of Egypt, the same land from which Moses brought the whole nation of Israel out of slavery thousands of years before.  Perhaps we here in our comfortable homes can think of the plight of Refugees throughout the world.

In late 2013 and in the light of the recent Typhoon in the Philippines, seeing the destruction and the plight of many thousands, the recalling the Tsunami on the feast of St. Stephen in 2004, the refugees who landed in Malta, Lampedusa and Pantelleria along with the fact that Jesus was a refugee caused Fr. Jeff to start thinking.................?  Hilary, one of his parishioners told him about Las Posadas.  What on earth is Las Posadas? 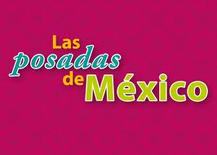 With a little research he found that Las Posadas is an old Mexican tradition where young people dressed as Mary and Joseph travelled from house to house asking for a room for the night and telling people about the imminent arrival of Jesus in the weeks leading up to Christmas.  On Christmas Eve they would visit the local church to re-enact the nativity and place figures of Mary and Joseph in a crib.  Modern day Posada uses nativity figures of Mary and Joseph who travel from place to place.  This gives each ‘host’ the chance to create their own celebration in their home or place in the community, worshiping and reaching out to their communities with the real message of Christmas, making room for Jesus in their lives.  He also found that there were resources on the internet.  Notably the Church Army web site (click the picture to the left to go to the Church Army Web Site) http://www.churcharmy.org.uk/posada/ and that many Churches in the UK had adopted this re-enactment of the Nativity.  Having a small statue of the Holy Family, knowing within the Anglican Communion Holy Innocents being kept on 28th December, the Naming and Circumcision of Jesus being kept on the 1st January and the Roman Catholics keeping the Holy Family on the 1st Sunday of Christmas, he worked a simple plot, a plot to let the parishioners start to understand the plight of Refugees throughout the world.  The plan would be to encourage them to over a series of days, commencing on that 1st Sunday of Christmas to give a home to the statue of the Holy Family, thus protecting it and understanding that it represents both the Christ Child and all who have to flee their own lands for protection.  Each person or family home would provide hospitality to the statue over each night and whoever took the Holy Family home from Church after Mass on 1st Sunday of Christmas, should take it to the next home and have a simple cup of tea or whatever and pass it on to the next person or family with a prayer.

Father, help us to live as the Holy Family, united in respect and love.  Bring us to the joy and peace of your eternal home.  Grant this through our Lord Jesus Christ, your Son, who lives and reigns with you and the Holy Spirit, one God, forever and ever.  Amen.

Then that person or family would then pass it on to the next and so on.  At each home neighbours, friends or even strangers could be invited to participate in the passing on, prayers and the simple refreshments.