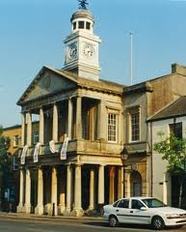 Chard is a historical market town in South Somerset and nestles between the borders of both Dorset and Devon.  With around 14,000 inhabitants the ancient Borough dates back to the 13th Century and is rich in history.  The town has a strong sense of community and is surrounded by beautiful countryside.Chard is a town and civil parish in the Somerset county of England. It lies on the A30 road near the Devon border, 15 miles (24 km) south west of Yeovil and, at an elevation of 121 metres (397 ft), it is the southernmost and highest town in Somerset.  Administratively Chard forms part of the district of South Somerset.
The name of the town was Cerden in 1065 and Cerdre in the Domesday Book of 1086.  Before the Norman Conquest, Chard was held by the Bishop of Wells.  The town’s first charter was from King John in 1234.  Most of the town was destroyed by fire in 1577, and it was further damaged during the English Civil War.  A 1663 will by Richard Harvey of Exeter established Almshouses known as Harvey’s Hospital.  In 1685 Chard was one of the towns in which Judge Jeffreys held some of the Bloody Assizes after the failure of the Monmouth Rebellion, textile manufacture was important in the Middle Ages.
Chard claims to be the birthplace of powered flight as in 1848 John Stringfellow first demonstrated that engine-powered flight was possible and the development of articulated artificial limbs.  Chard was a key point on the 'Taunton Stop Line', a World War II defensive line.
The Chard Canal was a 'tub boat' canal built between 1835 and 1842.  Chard Branch Line was created in 1860 to connect the two London and South Western Railway and Bristol and Exeter Railway main lines and ran through Chard until 1965.
Local folklore claims that the town has a very unusual and unique feature, a stream running along either side of Fore Street, one stream eventually flows into the Bristol Channel and the other eventually reaches the English Channel.  Chard Reservoir, approximately a mile north east of the town, is a Local Nature Reserve, and Snowdon Hill Quarry a geological Site of Special Scientific Interest.
Major employers in the town include Numatic International Limited and the Oscar Mayer food processing plant.  There are a range of sporting and cultural facilities, with secondary education being provided at Holyrood Academy and religious sites including the Anglican churches of St Mary the Virgin which dates from the late 11th century, situated in Church Street and our church of The Good Shepherd is situated on the corner of Furnham Road, A358, at the crossroads with the A30 in Chard.  Both Parishes are in the Diocese of Bath and Wells in The Church of England.Our church dedicated to The Good Shepherd was built in 1873, a member of the catholic revival in the Church of England and serves the growing community of North East Chard.
The Good Shepherd is welcoming to new comers, friendly and respecting to each individual.
Back to Home Page